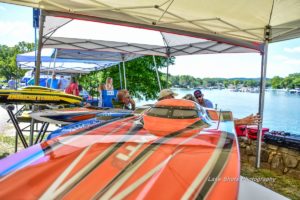 The year was 2010. A handful of radio controlled (RC) boat enthusiasts had united to establish what would soon be known as the Lake of the Ozarks Mini Shootout; an event which raises approximately $10,000.00 for Lake Area fire departments and local charities every year. Being fairly new to the quiet, tight-knit community of Coffman Bend at the 66-mile marker in Climax Springs, Larry and Sandy Triplett had recently retired from St. Louis and were officially full-time residents at the Lake of the Ozarks. 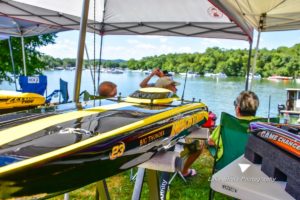 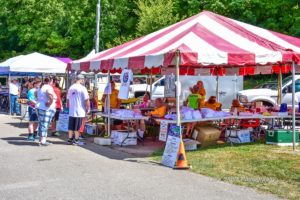 “In the past, the Coffman Bend community raised funds for our volunteer fire department through an annual cookout,” Sandy explained. “As that was typically only attended by Bend residents and a few visitors, the amount of money that we’d raised didn’t necessarily provide all that was needed by our fire department for purchasing and maintaining emergency equipment. My husband and I had previously volunteered at the Annual Bend Cookout, so it was natural for us help at the first-ever Mini Shootout.”

As the years passed and the seasons changed, so did the Mini Shootout’s venue. The Triplett family’s volunteer work evolved from spending long hours beneath a baking hot sun while helping run radar at Captain Ron’s, to manning the shoreline at Kelly’s Landing in Rainy Creek, where the spectators were few and so were the racers. Two years after being moved from Captain Ron’s to Kelly’s Landing, the Mini Shootout was relocated again to Papa Chubby’s at the 26-mile marker, where officiators faced a myriad of issues with consistent water disruption from vessels passing through or mooring at the restaurant. The President and organizers of the Mini Shootout knew that they had to find a place with calmer waters, safer boundaries, and ample room for spectators to relax and enjoy the races.

A place for the Mini Shootout to grow. 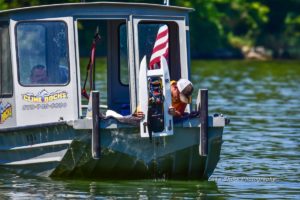 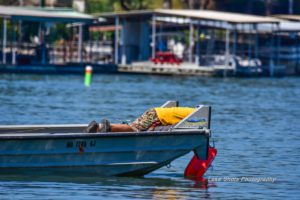 With a lot of input and support from Roger Leas at D&B Docks who built and delivered the radar barge, today’s Mini Shootout now takes place in the secluded waters of Ha Ha Tonka State Park. Between ideal water conditions, optimum speed capability and overall safety, Ha Ha Tonka has become its foreseeably forever home. It was around this time that the Tripletts’ son, Brian, and his wife, Cathe, had begun volunteering and have since helped streamline the recordkeeping process for documenting the racers’ speeds. This has allowed for racers’ times and standings to be made visible on a scoreboard and logged onto a spreadsheet, which calculates the current standings for all racers across 16 classes and is then posted onto the Mini Shootout’s Facebook page for the racers and fans to see.

“From running radar and setting up or taking down race courses to selling t-shirts and preparing sack lunches for other volunteers, we help wherever help is needed and as directed by Margie Frazier, President of the Women’s Auxiliary of the Coffman Bend Fire Association,” Sandy said. “Margie is a great volunteer leader. She communicates openly with all of the volunteers and always tries to make our time more efficient and effective. Margie is truly amazing.”

Margie, a fellow Coffman Bend resident and her husband, Ron, a fireman with the Coffman Bend Fire Department, have been lead organizers for the Mini Shootout since its inception, and they have volunteered hand in hand with the Triplett family every step of the way. 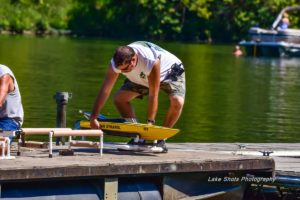 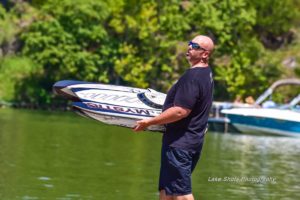 “Larry and Sandy help out on the Bend with almost everything we do,” Margie said. “They run the website for Coffman Bend and their son and his wife have a secondary home here now, too. Anytime that I have called either Larry or Sandy, they tell me, ‘What do you need us to do, Margie?’ They have been a part of the Mini Shootout since the very beginning, and they have done so faithfully.”

Lance Hedrick, Owner of Hedrick Motiv Werks in Osage Beach and current President of the Mini Shootout along with his wife Jeanese, Owner of Instant Signs & Banners and Marketer/Promoter for the Mini Shootout, know that it takes a village. In what is sure to be yet another record-breaking year for the Lake of the Ozarks Shootout, the Hedricks, Fraziers, and Tripletts have all agreed that it is a joint effort.

“The Triplett family handles our racer’s timekeeping and radar duties,” Lance said. “The organization that they bring to our timekeeping and leader board has made everyone’s jobs easier. I myself would be lost without them when it’s race day!”

“All of the fire department volunteers work together to make the Mini Shootout and other Shootout events go smoothly,” Sandy said, in closing. “What we really love is that everyone works together to get the work done. We are just one part of this very special group of volunteers. They are all truly amazing.”