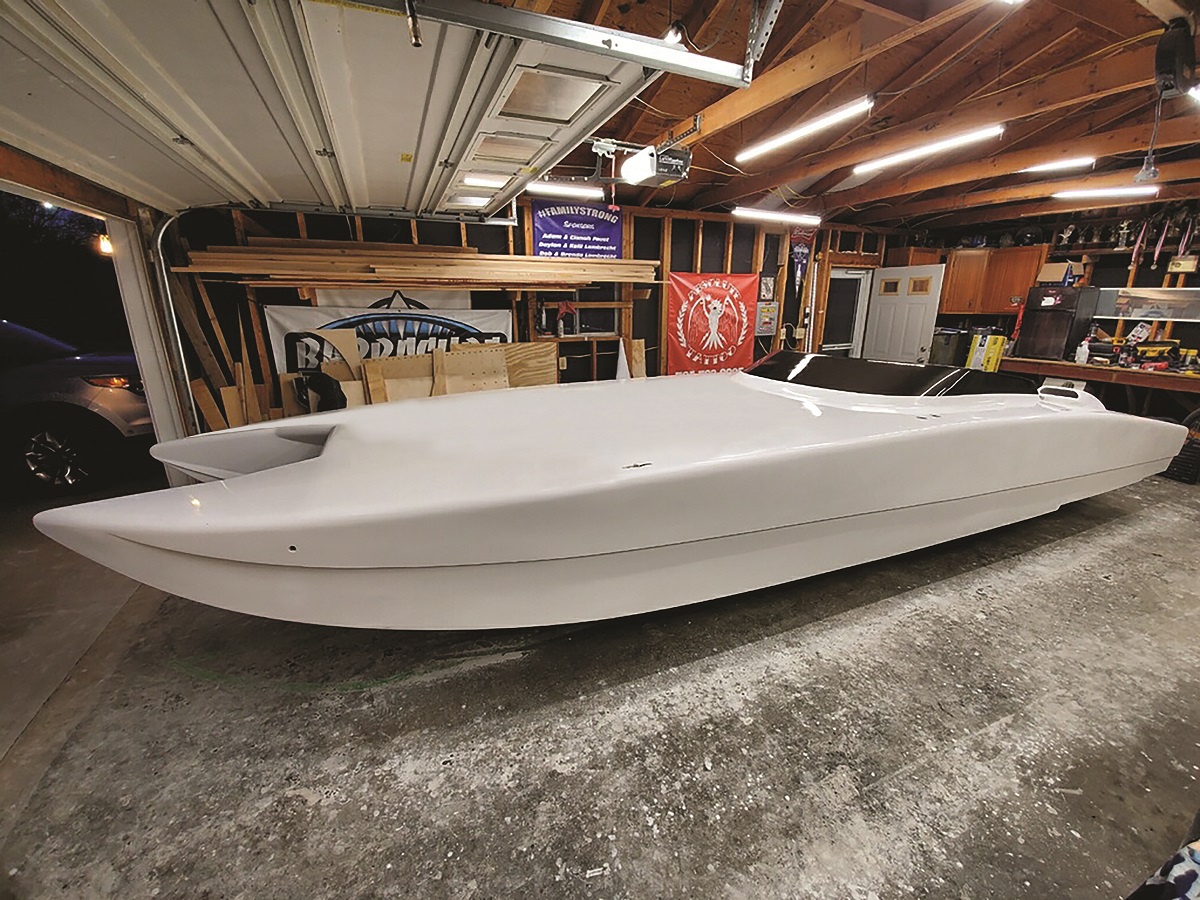 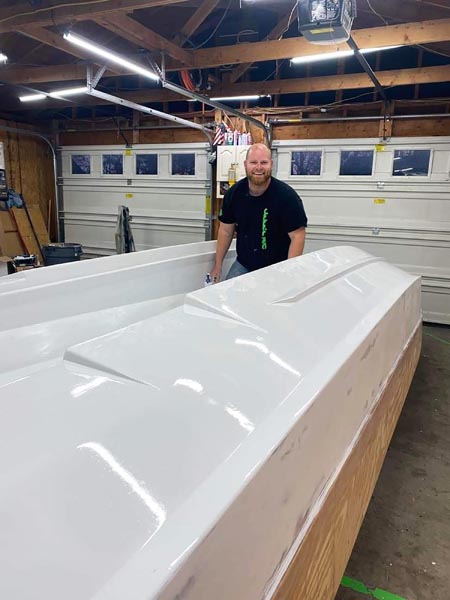 Heavy equipment operator and lawn care business owner (and DJ by night), Alex Schell, of Topeka, Kans., could have very easily used his limited free time over the past five years to sit back, relax, and dial back. He could have effortlessly satisfied his keen interest in all-things boating by reading articles published by SpeedontheWater.com and Speedboat Magazine, or by scrolling through the internet’s vast number of boating forums. He could have simply viewed MTIs, Skaters, and other catamaran manufacturers as an affluent daydream destined for others while taking life’s easier road or rather, its calmer waterway.

But that’s not Alex. Since 2017, he has been studying big-name manufacturers’ specifications and mirroring their design while building a custom, half-size catamaran in his backyard garage. And he plans to race it in this year’s Shootout.

“I decided to build a half-scale catamaran from the ground up,” Alex explained. Coming in at 22-feet long with two supercharged Sea Doo engines, this soon-to-be Shootout racer has done something that no one has ever done before at the Annual Shootout. It hasn’t come without hurdles, hiccups, and immense effort, however. 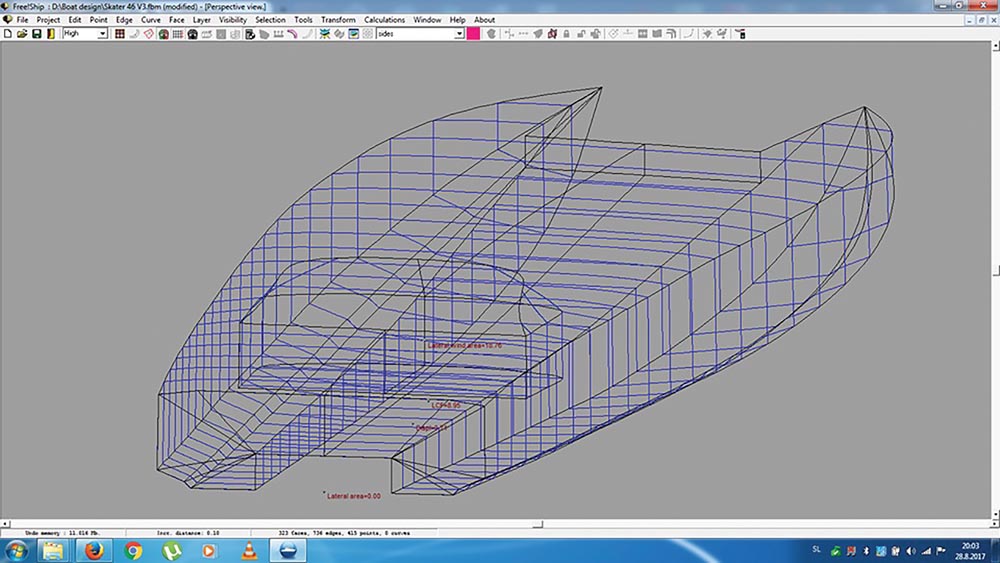 “Building this boat has been a tribute to Skater and the other great builders out there,” Alex continued. “As far as I know, no one has done a half-scale build like this, and no one has ever raced something like this at the Shootout. There are some miniature catamarans that are ‘toys,’ and they’re closer to 13-feet long with an outboard motor. I am basing mine off of the 45-46’ Skater Outerlimits boats. I have studied all of the manufacturers’ specs and simply cut the numbers in half. As far as I know, I have not seen anything like it anywhere.”

His boat is truly one of a kind. After ripping down two perfectly good 300-horsepower personal watercraft engines, Alex reached out to Barracuda RC Boats USA, a professional RC boat building company that he’d found online who assisted him in creating the custom cat’s bodylines. Having built everything from scratch, Alex’s intention was to build a 22-foot catamaran that looked just like a 46-foot catamaran, only smaller. 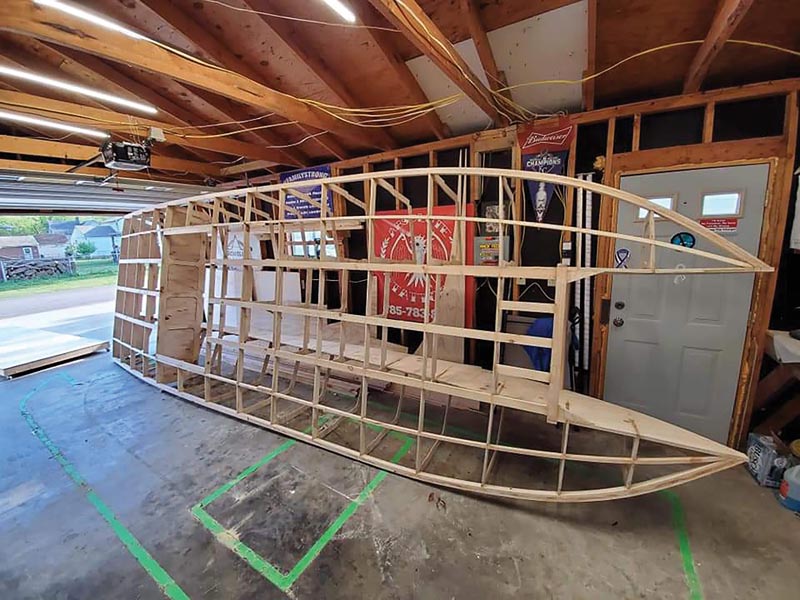 “I am shooting for 70 miles per hour this August,” Alex said. “I reached out and pitched my idea to Shootout organizer Ed Grimm, and I was able to secure a new Shootout class for my specific type of boat. Along with supporting the mission of the Shootout, this is really my tribute to all of these big builders and powerful catamarans, and it’s my way of paying my respects to everyone involved. I love boats and the power boating world, and everyone there at the Lake of the Ozarks. This is my way of paying tribute to everyone who has put it all on the line and raced in the past years.”

Beside Alex this August will be John Steflik, also of Topeka, Kans., who is a “speed demon” per Alex, and he will be running the throttles.

“John has raced go carts and race cars, and he will bring the boat to its fullest potential,” Alex continued. 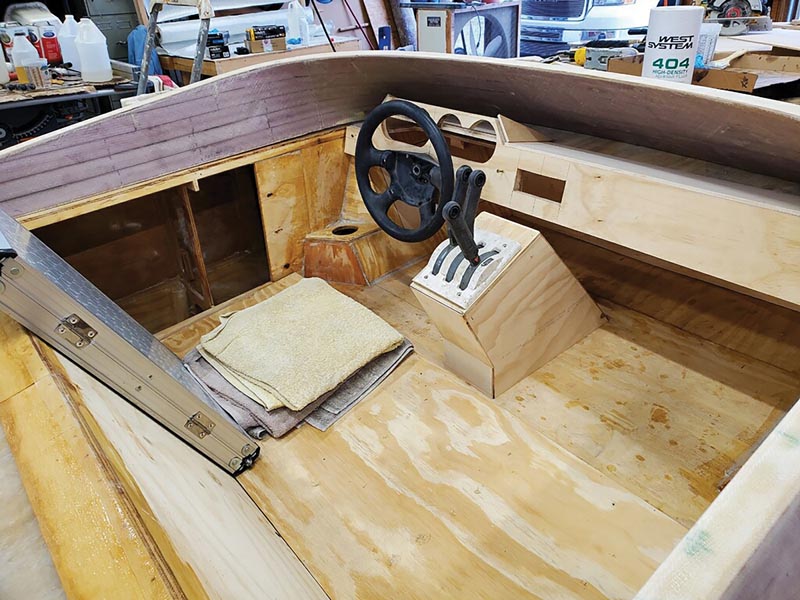 At the time of interview, Alex was nearing completion and had yet to test the boat’s full potential. He’d hoped to have the boat finished in time to complete several test runs prior to the Shootout, and to have it fully tuned for late-August’s races.

“Now that I am nearing the end of this project, it feels like things are going in slow motion,” Alex laughed. “I feel like building a boat is sanding at least 90% of the time. The closer I get, the longer it seems for me to get anything done and there is a lot of pressure involved, because there is also a time crunch. I definitely want to have it done well before the races so it can be properly tuned and tested. It feels a bit like running in sand right now.”

With the boat being 95% completed, the only remaining touchups include paint, buffering, and sprucing up the interior.

“I am still installing the motors, but we are pretty much ready to begin the rigging process.” Alex said, in closing. “We’re waiting on a few custom-exhaust engine parts and we are finishing up the wiring. We are right on track though, and I really can’t wait to see what it’s capable of when it’s all said and done.”

Neither can we, Alex. We’ll see you in August.