GREETINGS FROM THE CAPTAIN/RACE COURSE MAP 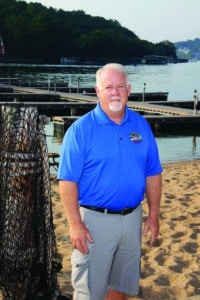 by Ron Duggan, President, Lake of the Ozarks Shootout, Inc.

Greetings from the Captain – Shootout 2021

Welcome to the Lake of the Ozarks and to Captain Ron’s for the 33rd anniversary of the Shootout. This year marks the 14th consecutive year that Captain Ron’s has hosted the annual Shootout. With last year’s incredible donation $400,000.00 to 38 Lake Area fire departments and local charities, the bar has certainly been raised.

With everything going on in the world last year, almost every event in the country was cancelled. People in the cities were on lockdown, businesses were closed, employees were either working from home or not working at all, and most of the world was afraid to go anywhere; but not here at the Lake of the Ozarks. We were open for business, and even though there were a few cases of Covid-19, the people of the Lake were not going to let it affect their daily lives. Schools were open and businesses were booming.  Local officials stressed cautionary measures, but stepped aside and let our community decide how we wanted to handle the pandemic.

When the Missouri State Fair closed for the first time in, well, forever, I started making phone calls to every local politician, fire department chief, and board member on what we should do. The message was always the same: go forward with caution.  Still, with the age of our volunteer base, I just couldn’t image the impact on the Shootout if one of our volunteers became sick and died from this virus. Then I received a phone call from Hall of Fame Volunteer Margie Frazier. She assured me that the volunteers are really smart people and if they made the decision to show up, they were doing so with open eyes. Her words resonated with me and we moved forward.

Even though our volunteer numbers were about half of what they had been in previous year, the 400-plus volunteers put on an amazing Shootout and certainly one for the record books. From incredible speeds of 125 mph from a remote control boat to American Ethanol’s six-peat as Top Gun at 202 mph, it was another fantastic event.  Thank you for attending and participating in the 33rd anniversary of the Lake of the Ozarks Shootout.

This is certainly an event like no other and on behalf of the entire Shootout Board, Committee, volunteers and sponsors, we appreciate you being here.

Lake of the Ozarks Shootout, Inc.