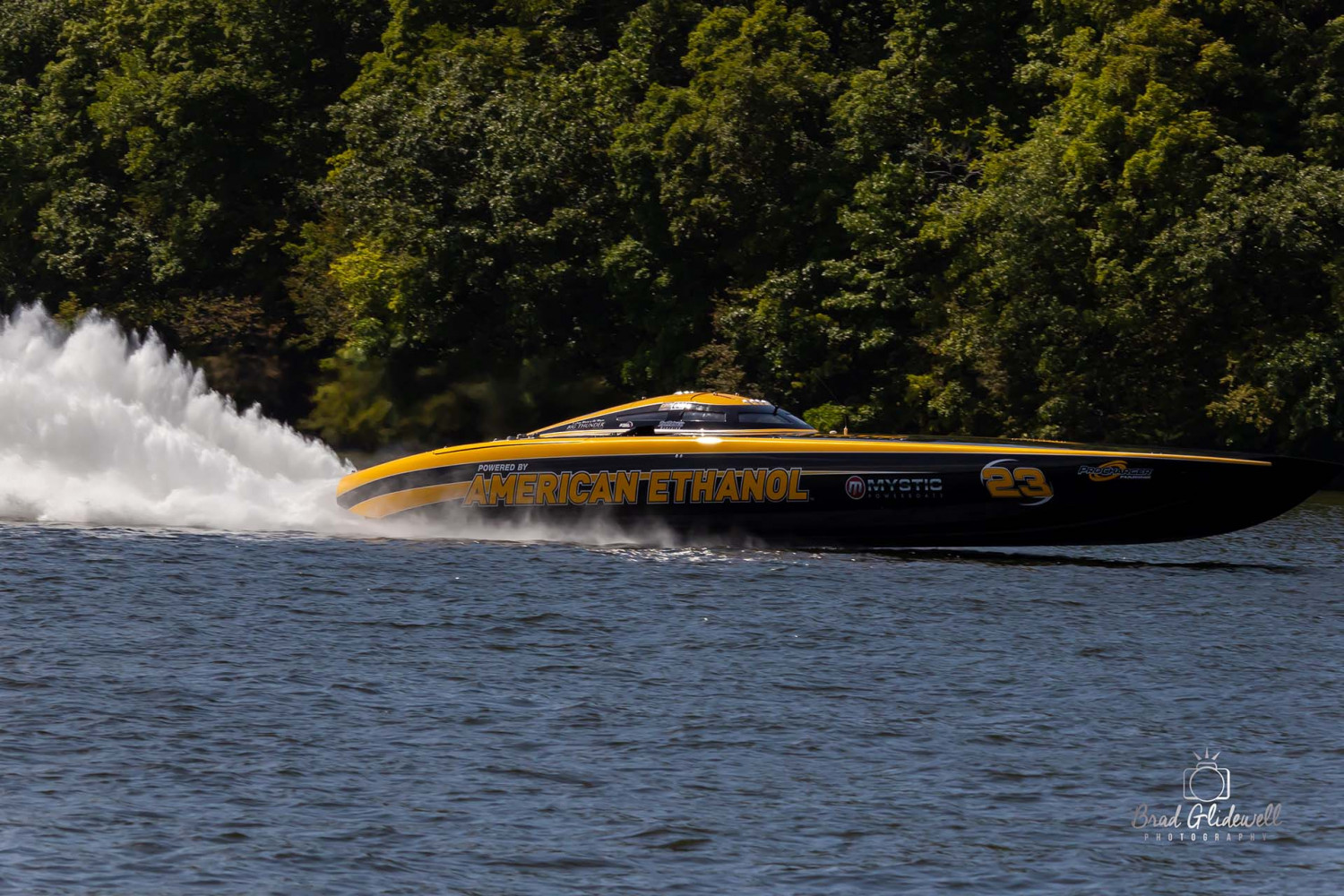 The Lake Rescue Shootout started in 1988 as an event in which many local boats participated simply to establish who had the fastest boat. As the years went by it became a bigger and bigger event that also helped supplement the Lake Area Fire Departments water rescue efforts.

The ad book became the current 8 1/2" x 11" format. The book has continually grown each year as more merchants and businesses participated. At this time it became called the Shooters Shootout or Natoli's Shooters 21 Benefit Shootout through 1993 (Chairman of the Shootout board was then Carmelo Natoli)

It became known as the Caleco's Shooters 21 Benefit Shootout (Chairman of the Shootout board was then Mark Michael).

The event became officially known as the Lake Fire Rescue Shootout. The number of boats participating has continually increased each year.

On Sunday 80 boats ran, making 128 passes through the course that day. Boats over 22 feet in length are allowed to run. Boats run in classes by length, hull design, size of motors, and number of motors.

The Lake Rescue Shootout was proud to bring on POWERBOAT Magazine, Charter Communications and Tan-Tar-A Resort as sponsors.

Brought on Extreme Power Sports from here at the Lake and a new course record set by Dave Callan and John Cosker of 208 mph.

The poker run is now 2 days and Lucas Oil on the Edge on Speed TV will be on location filming the event & John Cosker breaks his own record with an amazing 209 mph run.

The 20th Anniversary Shootout brought a whole new atmosphere for the first time in 20 years. The Shootout was held at a new location. Captain Ron's Bar and Grill was chosen for the new site following the demolition of Shooters 21. With the new location & renewed excitement over 60,000 fans watched the 2 day races. Dave Scott reclaimed the TOP GUN with a 178 mph run.

New records were set all over the place as David Scott set a new course record at 196 mph and record attendance was estimated at over 70,000 spectators. Despite a sagging global economy, the Shootout remains stronger than ever.

David Scott and John Tomlinson made it three in a row with a blistering run of 208 mph. With the addition of 6 new events to complete a week long schedule of activities, the committee set a new record by donating $70,000.00 to 20 different charitable organizations. The goal of the new committee was to make it a week long event instead of just a weekend. 2010 saw that happen as they added a Treasure Hunt, a Mini-Shootout, a meet and greet with the Racers during the Shootout on the Strip, Puttin' on the Wish Rides, a fantastic Fireworks display, and an additional Concert featuring David Ball on Monday night that provided much needed food items to a local food pantry.

For the first time in three years a new champion was crowned. Canadian Bill Tomlinson and Ken Kehoe driving a sleek turbine powered Mystic named "My Way" ran 8 times and tied the course record of 208 mph on three different runs. A record of over 100,000 fans witnessed the record setting week as $70,570.00 was donated to 20 different organizations. Another record of 493 Volunteers donated 5727 hours to make this event the largest community event of its kind.

We are extremely excited to announce that we have donated $100,000.00 to 22 different organizations in the Lake area. We achieved our 5 year goal thanks to all of our sponsors, participants, vendors and to the public for attending all of our events this year. A big thank you also goes out to the 569 Volunteers that donated 6,425 hours to making this event the most successful in the history of the Shootout.
In the 5 years since the event was moved to Captain Ron's, the Shootout organization has donated over $322,000.00 to Lake Area Charities and continues to grow each and every year.

The 25th Anniversary was nothing short of amazing. Events all week were packed. The Street Party which now became known as the Shootout in the Park was a tremendous success with over 8,000 people eating, drinking and conversing with all the race teams at the Laurie City Park. The new Shootout Hall of Fame had 10 new inductees from all aspects of the 25 years of the Shootout. There were very few dry eyes when Sue Morgan unveiled the new Bob Morgan Memorial/Shootout Hall of Fame at Captain Ron's, complete with a flyover in the missing man formation as America the Beautiful was sung. The Racing was nothing short of spectacular as racers set new Shootout records including Joe Sgro's 152 mph as top V, Dan O'Keefe's 95 mph as top PWC, and Brad Rowland amazing 114 mph as top Pontoon. It was only fitting that on Sunday morning, the second run of the day, set a blistering new Shootout record of 224 mph by Bill Tomlinson and Ken Kehoe in My Way. And as great as all of that was, the Shootout Committee set an unprecedented amount of giving for the Shootout by handing out $115,000.00 in checks to 22 different Charities and Fire Departments. The Shootout is alive and well and looking forward to the 26th year in August of 2014.

The 26th annual shootout was one of two completely different emotions. From the lowest of lows to the highest of highs. The Spirit of Qatar absolutely smashed the old record that My Way had set just one year prior but it wasn't without a little drama of its own. On it's first run, a third of the way down the course, the parachutes deployed and caused a little tension with its crew, but they safely guided the Mystic down the remainder of the course and established a new second highest speed at 210 mph. Later on that day, the Spirit of Qatar blew away the field and all records by making an unbelievable run of 244 mph. With twice the horsepower of My Way, it was a run that was anticipated, but seeing it was amazing! In between runs, however, was the lowest point of the 26 year history of the Shootout when Joel Begin's boat, throttled by Mike Fiore, flipped end over end at the finish line. Rescue crews did a tremendous job of securing the scene and getting both men to the hospital. It was reported later in the day and again on Sunday, that Joel was able to walk away from the hospital the next day and that Mike would fully recover. On Tuesday after the Shootout, a day after hip surgery, Mike Fiore passed away and the entire Shootout family mourned his tragic death. The Shootout family and friends will always remember Mike and his contributions not only to the Shootout, but for his value and dedication to all of powerboating.

The Lake of the Ozarks Shootout continues to grow and grow. As the economy improves, so does the generosity of the supporters of the Shootout. With Performance Boat Center coming on board as the title sponsor and a record set for donations at the Auction, the Shootout committee donated an incredible $175,000 to 31 different organizations and charities. After 8 years at Captain Ron's, the Committee has donated $747,747.00 back to the community. Top Gun accolades went to the Don Onken family as the newly sponsored American Ethanol Mystic powered its way to a piston powered record tying performance of 208 miles per hour. Mystic owner John Cosker and performance boat guru Myrick Coil set the standard for 2015 and made the entire Onken family beam with excitement. The weather was perfect and crowds were amazing and any thoughts of a down year, were immediately squashed. The Shootout is alive and well!!

In the 9th year at Captain Ron's and the 28th overall year of the Shootout, it just seems amazing that the records continue to fall for this event. American Ethanol, owned by Don Onken and his family repeated as Top Gun, by setting a record for a piston powered boat at an amazing speed of 217 mph. Piloted by Slug Hefner and John Cosker, this Mystic excited the crowd of almost 70,000 people on Shootout Saturday. Along with many other records, a new standard for the amount raised for the charities was established as the Lake of the Ozarks Shootout Committee donated $195,243.00 to 34 different organizations, fire departments and charities. In the 9 years this event has been at Captain Ron's, an amazing $943,000.00 has been donated back to charity.

Note: The 28 year history of the Shootout 1 mile course is in the books, and beginning in 2017, all new records will begin with a ¾ mile course. Be the first to set a new record at each classification and be a part of the 10th anniversary at Captain Ron's as we surpass the $1 million mark of donations.
Shootout HOF Thanks
Shootout HOF Event Meaning
Shootout HOF Why is LOTO Special
Shootout HOF Involvement
Shootout HOF Favorite Memory
Shootout HOF Proudest Moment
Contact Us