More Than Just Speedboats: Personal Watercrafts, Pontoons & Tri-toons - The Kickoff to the Shootout 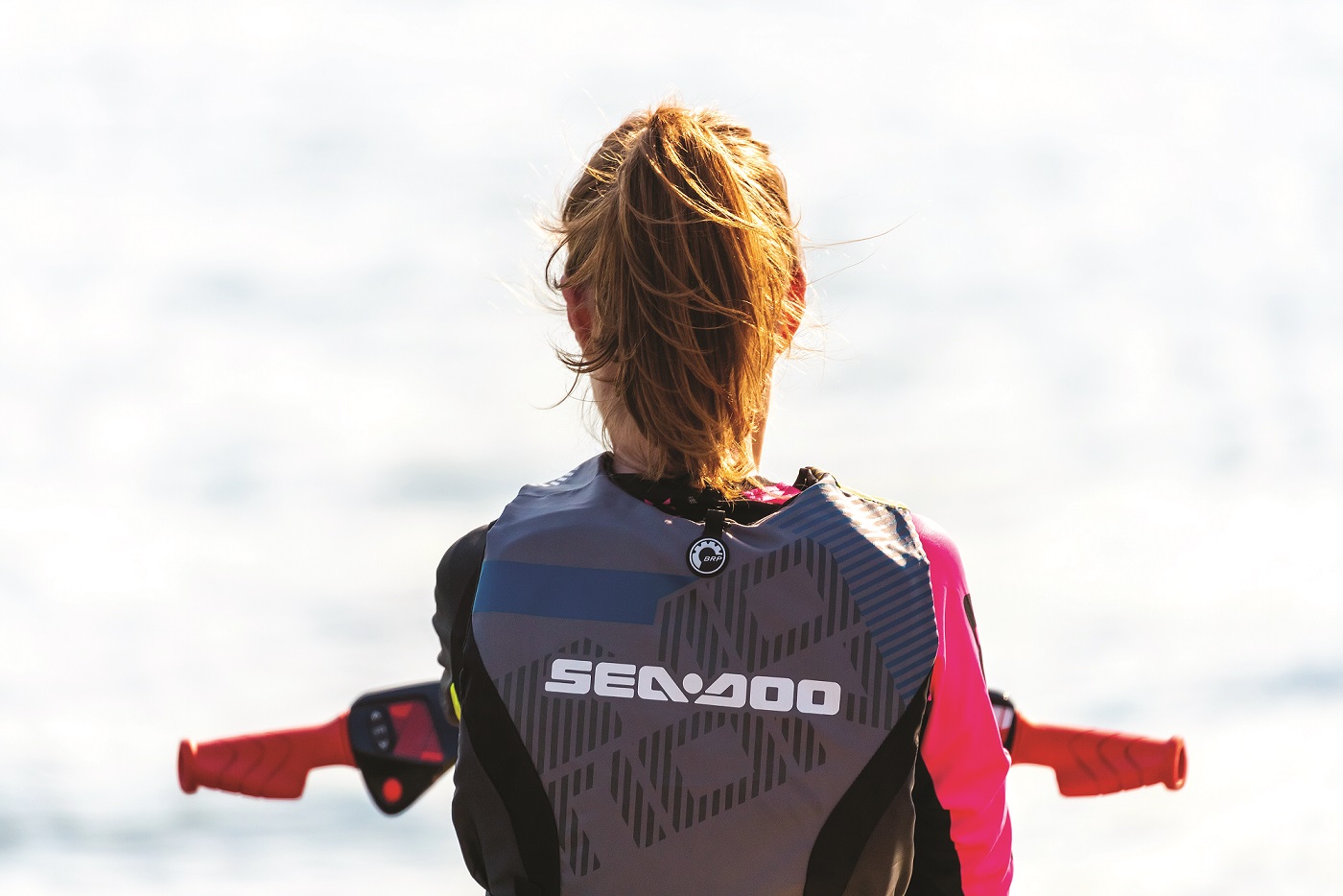 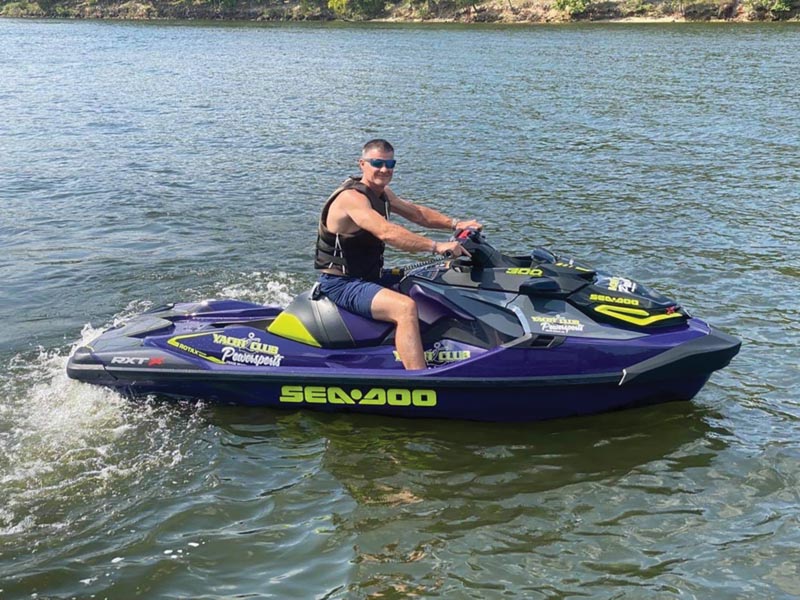 It seems like those 150-200 mile-per-hour catamaran and vee-bottom boats really steal the show at the races every year, doesn’t it? Without fail, high-performance boats take the Top Gun award for fastest overall while dominating the vast majority of the weekend’s races. Of the 70 class winners from 2021, only two of those were for PWC operators in either the stand-up classification or women’s open. Conversely, there were 12 pontoon and/or tri-toon class winners, leaving the remaining 80% of class winners to the cats and vees.

The truth, however, is that these jet skis, pontoons, and tri-toons reach incredible speeds along the 3/4-mile-long course every year. Can you imagine operating at 77 miles per hour on a personal watercraft? Because that’s what class-winner Kristen Grzegorczyk did last year.

“Running a PWC at nearly 80 miles per hour on the Lake of the Ozarks gives you the most amazing adrenaline rush, but in the same breath, it’s incredibly therapeutic,” Kristen, Owner/Founder of KG Wraphics, LLC. of Lake Ozark, said.

Kristen, who is originally from the Northwest Suburbs of Chicago, says that everyone has been incredibly welcoming here at the Lake of the Ozarks – a place that she has called home since May of 2021. As a small business owner and entrepreneur, Kristen understands just how important the support she receives from her surrounding community really is.

“In addition to my fellow PWC racers at the Shootout, the entire personal watercraft community at Lake of the Ozarks has been incomparable to any other,” Kristen continued emphatically. “It’s really an incredible experience to be able to enjoy the high-speed aspect of racing WaveRunners with other likeminded souls who love it like I do!” 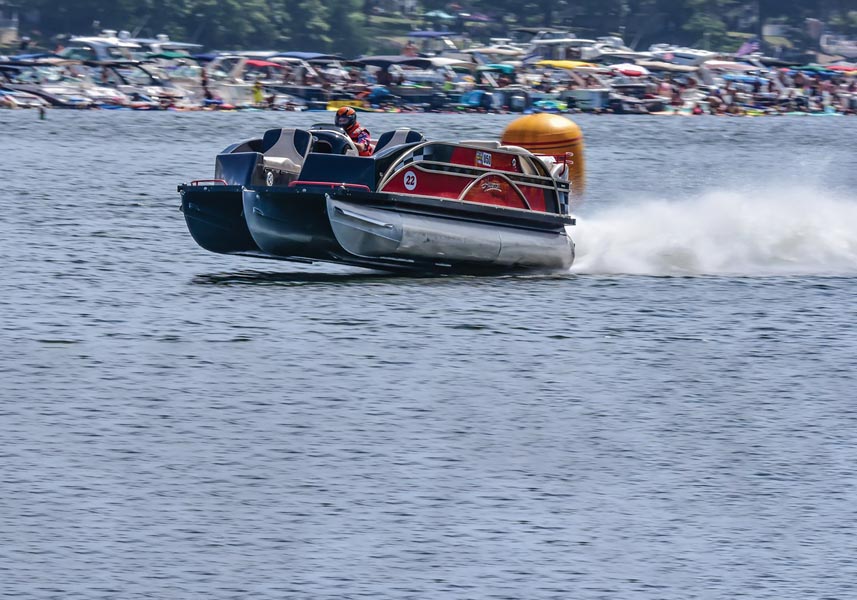 As for the Top PWC class winner of 2021, Dan Gogel, General Manager of Yacht Club Powersports in Osage Beach, came in at a breezy 80 miles per hour last year, and he hopes to hit triple digits this year – something that the Shootout has never before seen from a PWC.

Dan, a former amateur superbike racer (a motorcycle with 1,000+ CCs), is no stranger to going fast.

“Speed isn’t an issue for me,” Dan continued. “When I raced superbikes in St. Louis several years ago, I’d get up to 180 miles per hour, which is 100 miles per hour less than last year’s winning run on a PWC. With personal watercrafts, the water conditions are really everything when it comes to your overall speed potential. The PWC races are typically scheduled earlier in the morning on Saturday, and they’re before the start of the rest of the weekend’s races – when the no-wake zone has not been put in force yet. The unpredictability of the water conditions greatly impacts the outcome of your run. Although it felt great to win at 80 miles per hour last year, I was actually able to get the Sea-Doo up to 90+ miles per hour in a calmer cove setting the very week beforehand. I’ll be 48-years-old next month. I’m not getting any younger, so why slow down now?” Dan rhetorically asked, laughing.

A little later on in the days’ races, Jim Dorris, Owner and President of PlayCraft Charger Boats in Richland, Mo., can usually be found in a Playcraft, of course (with this year’s race boat to be determined, but likely a twin tri-toon and a single tri-toon for the 2022 races). At almost 80-years-old, Jim has never missed a Shootout since first racing in the mid-1990s.

“The fastest speed I have ever gotten at the Shootout in a tri-toon was 98 miles per hour,” Jim said. “The one-mile course was always, as far as I was concerned, the best one. As the horsepower and boats got bigger and bigger over the years, the safety crews felt they had to cut the course back a little from a safety standpoint. The ¾-mile course is fine for a pontoon or tri-toon, but for some of those boats, it takes a little longer to get up to speed.”

Jim, a member of the Shootout Hall of Fame, reminisced upon the good old days where the races were more about having fun, and less about the competition.

“Racing in the Shootout is still fun, but at the same time, you’re always reaching to be on top,” Jim explained.

“I am getting up in age and I don’t know how long I can keep racing, but I’m going to keep doing it as long as my health holds out,” Jim said, in closing. “Last year, I hit 81 miles per hour. Hopefully, I can continue to do at least my age again this year.”

As for our fastest pontoon/tri-toon class winner of the year in 2021, Brad Rowland came in at a smoking 113 miles per hour – more than many of us have ever driven in a vehicle, much less on the rocky wavetops of the roaring Lake of the Ozarks. 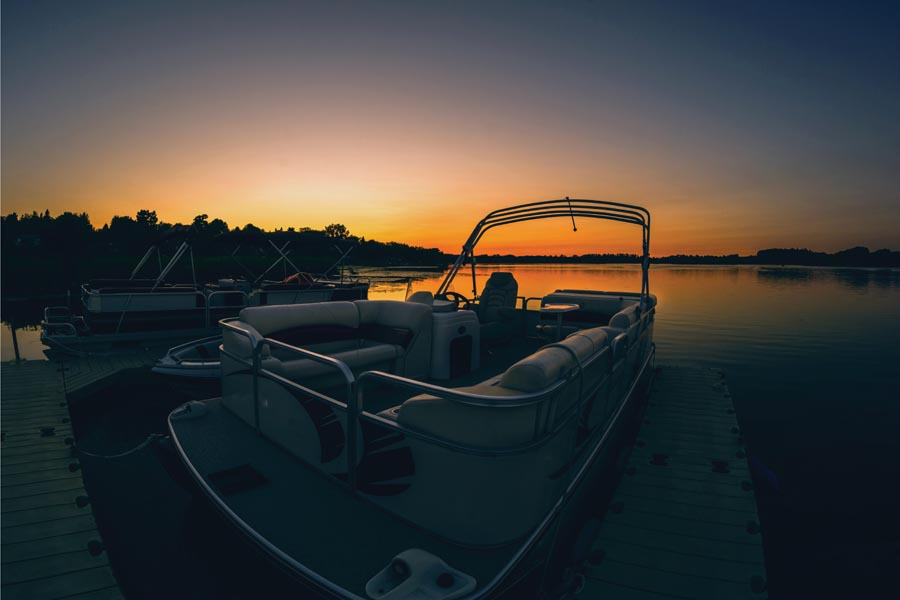 “Running in a tri-toon versus a pontoon helps you take to the water a little more easily, and they tend to be a bit more stable,” Brad, a veteran racer of the Lake of the Ozarks Shootout and fellow member of the Hall of Fame, said.

“My tri-toon accelerates hard,” Brad continued. “You know you’re on top when you don’t feel any water thumping against the plywood that you’re sitting on. A gust of sidewind can push you in the direction that the wind is blowing but the goal is to try not to touch the wheel, and just let her run straight.”

We all remember the terrifying crashes of operators along the racecourse over the years, where several racers have paid the ultimate price for a day that should otherwise be filled with nothing but excitement and exultation. The Lake of the Ozarks, however, can be as unforgiving as it is alluring.

“I have gotten much better at getting the right propellers throughout the years,” Brad explained. “If you’re lying flat with too much of your boat in the water, then you’re slowing down. There is a very fine line there. I have known a few guys that have been thrown out over the years and got lucky. This scenario is always playing in the back of your mind.”

“Last but never least,” Brad said, “I’d like to throw a big shoutout to Big Hammer of Hammer’s Transport for all the years of helping and supporting Tooned In! Rest in peace, Big Hammer.”

With that, we hope to see record-breaking speeds from a PWC this year—with safety and fun for all. May the exhilaration and carefree enjoyment that all pontoon and tri-toon racers experience at the Lake of the Shootout each year continue to grow in following and number, because their presence and participation means just as much to the Lake Area community as any other. 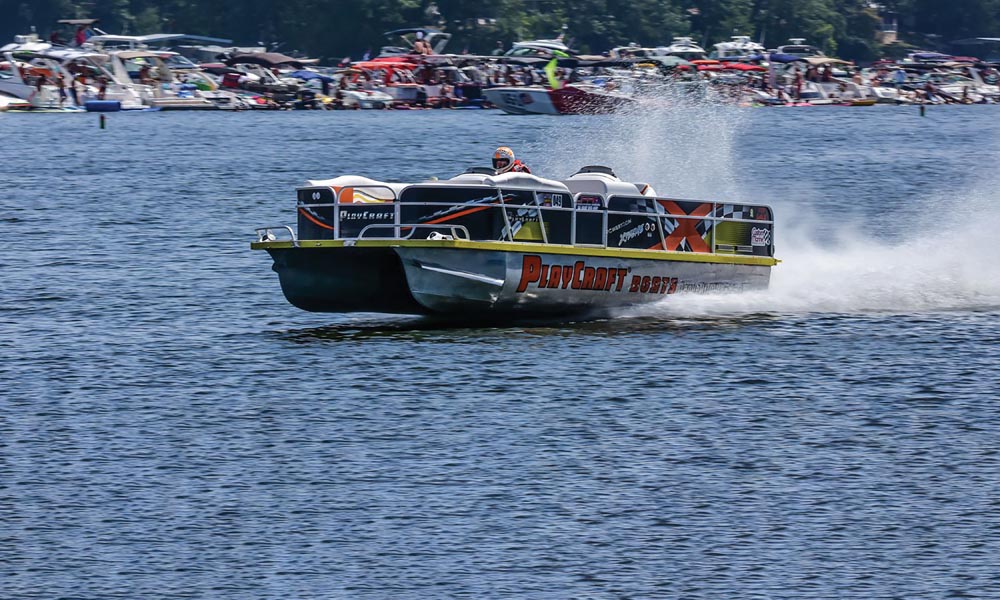