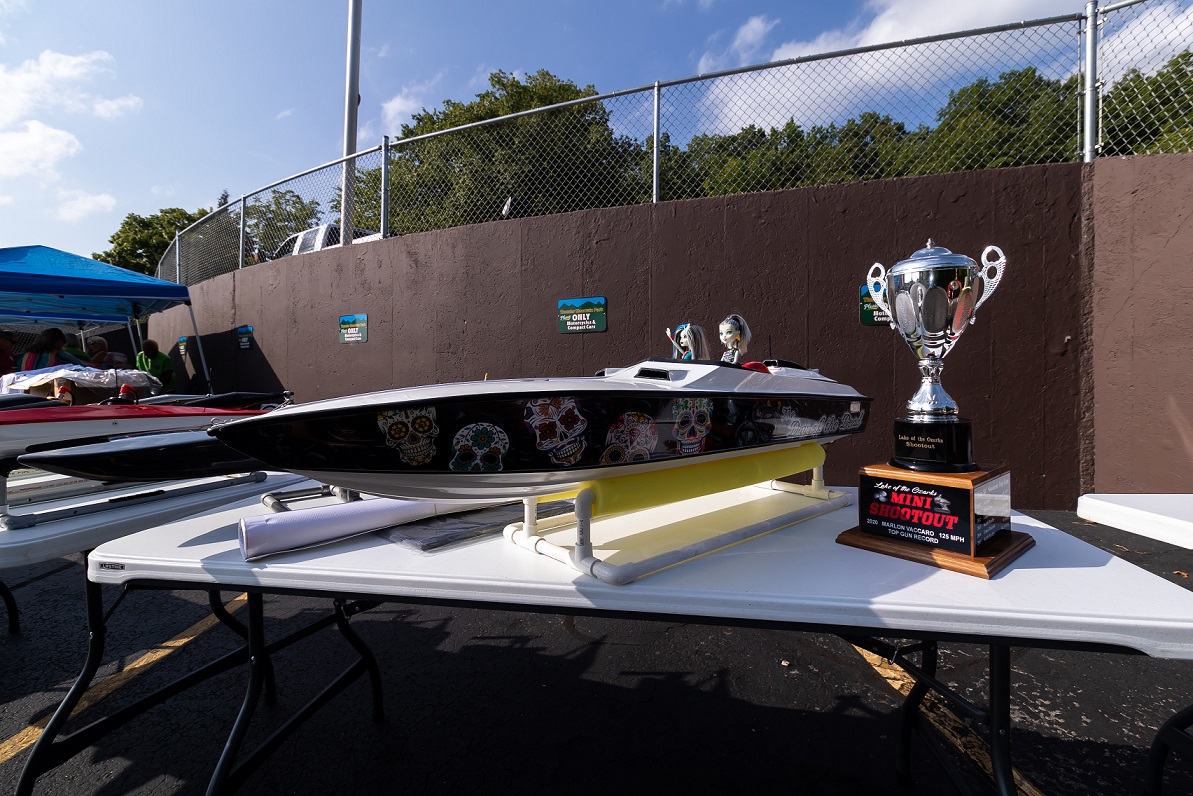 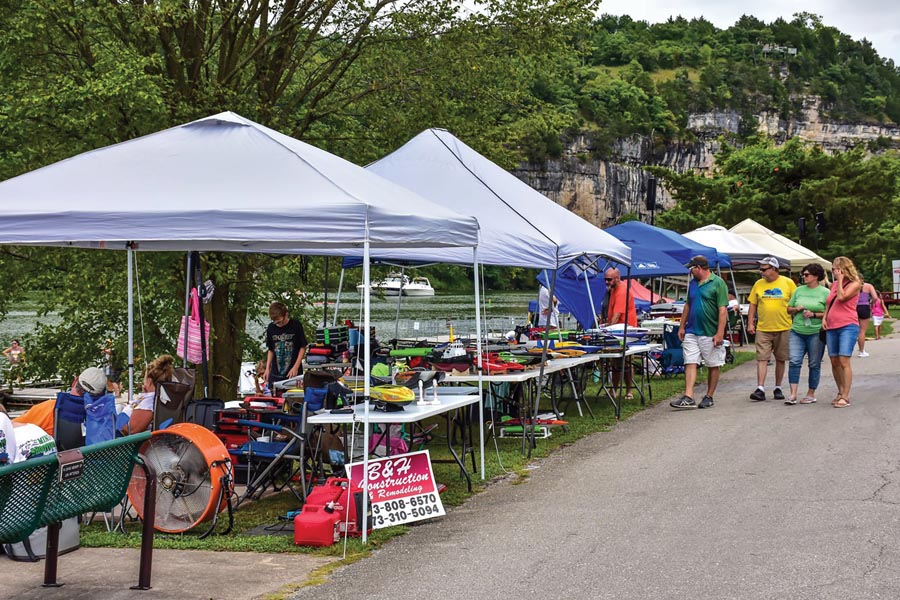 Another year, another “largescale” and “miniature” Shootout. Believe it or not, RC boats are now capable of reaching the same top speeds that the Top Gun winners racing in full-sized vessels have at the Lake of the Ozarks (with 206 miles per hour recorded globally in 2021). It’s the little things — and the even bigger engines — that make life grand, isn’t it? But as we all bear down to either spectate or showcase all manner of powerboats this season, a small but equally dedicated group of enthusiasts are preparing their very own showcase. But in this case, the thing making life grand is indeed little; it’s the Lake of the Ozarks Mini Shootout.

The Mini Shootout, to the uninitiated, is a high-speed, high-intensity RC Boat Shootout. Model boat racers from all around the country bring their boats to compete. But these boats are a far cry from Nikola Tesla’s bulky prototype from a hundred years ago, or your grandpa’s miniature version of the boat from Jaws; the boats that compete in the Mini Shootout are mean. 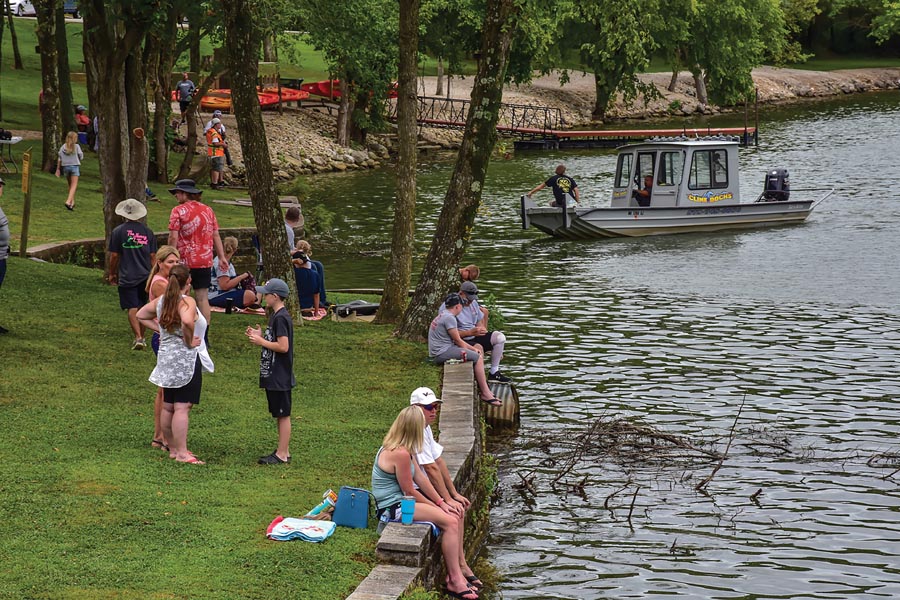 Many different types of boats are allowed to compete at the Mini Shootout, and the racing is open to all ages, making this the perfect bonding activity for many families. Year after year, folks drive in from all across the country with the boat of their choice, whether it be an open-hydro, three-point hydro, a V-hull, or a catamaran. Mini Shootout officials also accept a variety of propulsion methods for competing boats, from fast-electric engines to engines powered by nitromethane, and of course good ol’ gasoline.

RC boaters are an explorative and savvy bunch, and this shows in the progress the sport has made in top speeds over the last ten years. Last year’s winners, a tie between Kirk Dorsey & Chase Graham, topped out at a mind-blowing 103 miles per hour. Just a few short years ago, the winners were going home with the gold for clocking boat speeds around 60 miles per hour.

The ingenuity and genius of engineering that spurned such massive growth in model racing boat capabilities aside, this sport is still what it has always been; spending beautiful afternoons out on the waterfront running boats, relaxing and making friends. 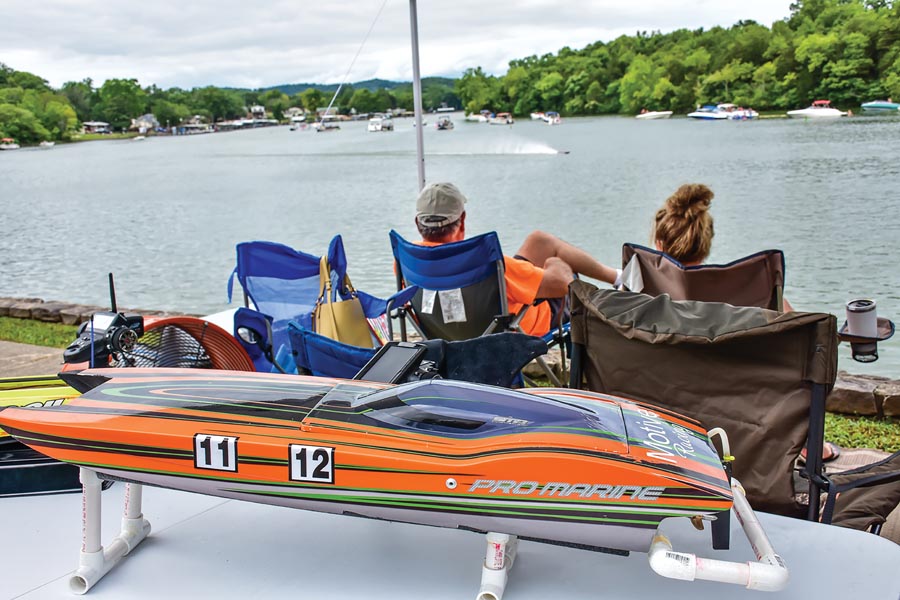 The Mini Shootout is more relaxed in its regulations than racing organizations like the International Model Power Boat Association (IMPBA) and the North American Model Boat Association (NAMBA), allowing for some of the greatest variety in competition that one is likely to see. Differing from the multi-lap racecourses that these other associations find their bread and butter in, the Mini Shootout’s allowance of all fuel types to compete against one another, the ultimate comparison test. Boats are given a lane on the water to rev up to full speed, passing by an official that clocks the speed via radar.

Many, if not most drivers, are also aligned with organizations like these outside of the Mini Shootout,
but can’t resist the temptation to watch from the controls as their custom-built model racing boats scream across the Lake of the Ozarks. As the common rules of model boat racing don’t all strictly apply here, racers get to relax a bit more and just focus on what’s important: Speed. 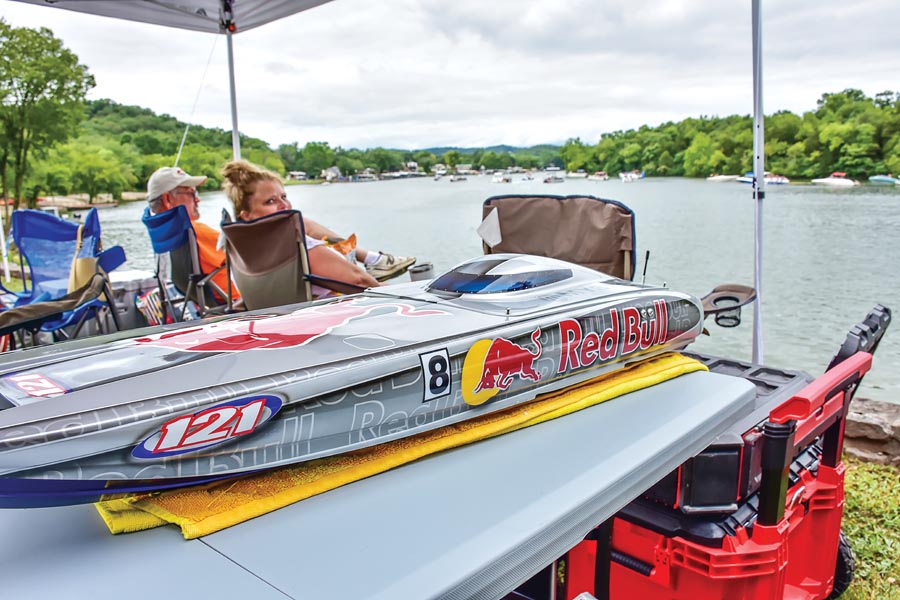 You won’t find many, if any, ready-to-run boats purchased from hobby stores at the Mini Shootout, by the way. At this level, the chop in the water combined with the crosswind during high-speed operation puts stress on the hull, too much stress for most common hobby store boats. Hull damage, and even destruction of the boat is a common occurrence with these types. Even ready-to-runs with hopped up motors allowing for higher speeds can’t compensate for this, and so the serious racers know that in order to stand a chance, they must either build a boat themselves or seek out a professional boat builder and design one to their desired specifications. So that’s why you’ll be seeing model boats the size of surfboards or small cars at this event.

That’s not to say there isn’t room on the Lake for ready-to-runs, of course! All racers know that the most important thing about this sport is fun, and many parents use the hobby to introduce their kids to watersports in a way that is both relaxing and exhilarating. Every year, kids across America get to discover a new passion with their parents and friends, feeling firsthand the excitement that comes from their time at the wheel, watching something so small move so fast and with such precision. Whether they grow up to be model boat racers, powerboat racers for the main Shootout, or just folks that love a sunny day on the lake, it sure is a healthy way to spend time.

So this year, as you’re gearing up for the main Shootout, be sure to take the family and head down to The Springs at Ha Ha Tonka State Park for the 13th Annual Mini Shootout. Enjoy the sun, the fun, and the camaraderie of the racers and enthusiasts. Who knows, maybe you’ll find a passion for model racing of your own!