As part of the ninth annual Lake of the Ozarks Shootout Bob Morgan Memorial Hall of Fame class, Rob Morgan, the son of the Hall of Fame’s namesake who died in an offshore racing accident almost 10 years ago in Key West, Fla., is being inducted alongside five other notable members. At a dinner ceremony scheduled for Tuesday, Aug. 24 at the Lighthouse in Sunrise Beach, Randy Kent of Marine Concepts Motorsports and Speed Racer boat fame joins the esteemed group with longtime participant and class winner, Ivan “Buck” Stracener of Southern California, Dennis Klautzer, the pioneer of the KRMS Radio broadcast, and Advantage Marine LOTO founders and dedicated volunteers, Connie and Dave Weyer.

This year, every inductee—as has been the case with most, if not all, former class members—was surprised to learn the good news, especially Rob Morgan, who hasn’t competed in the event for more than 10 years. Completely appreciative, flattered and shocked, Morgan was most excited to use the recognition to promote the Bob Morgan Scholarship, which is sponsored by the Lake of the Ozarks Marine Dealers Association and designed to keep Lake Career and Technical Center students graduating from the Marine Service Technology or Metal Fabrication fields at the Lake. 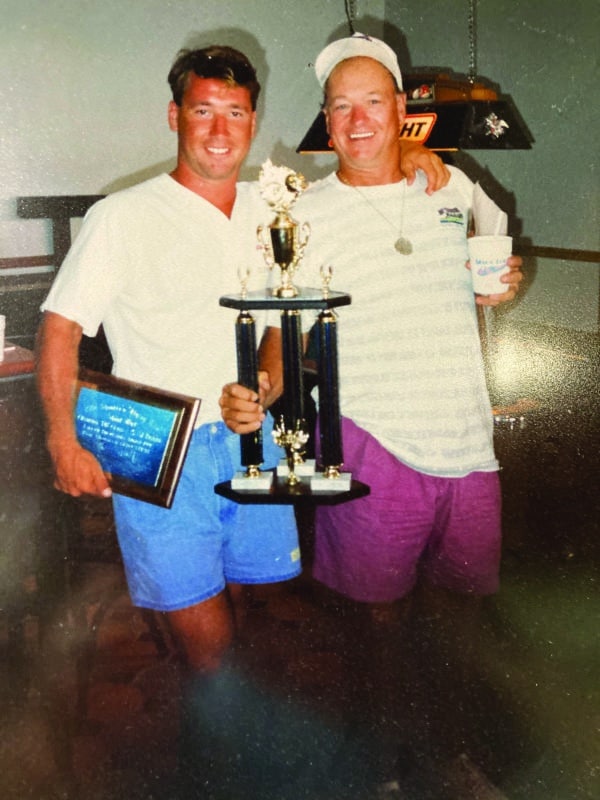 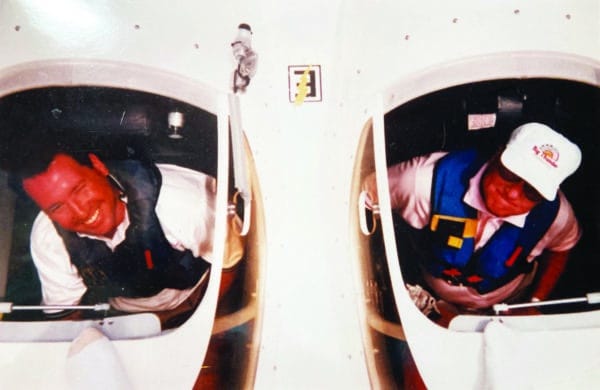 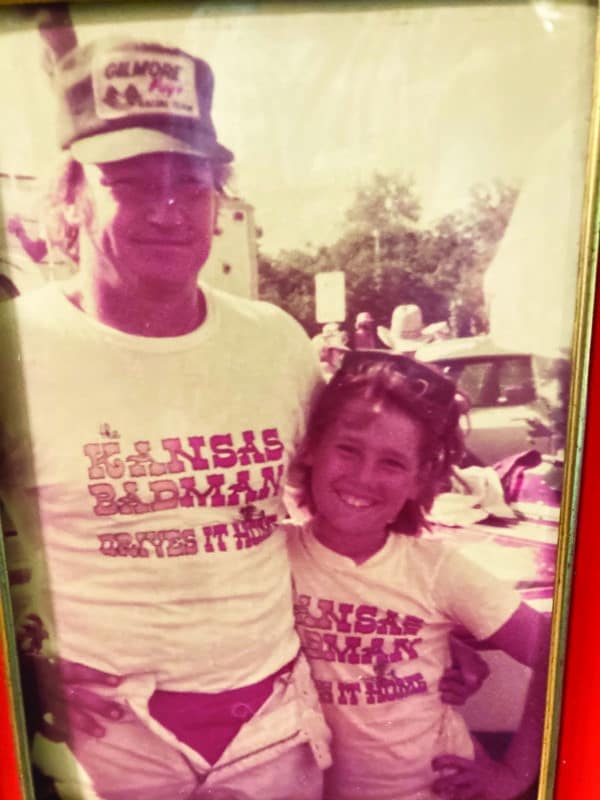 “I couldn’t believe it when Mark Maasen told me the news—he and I have been friends since back when dad started Big Thunder in 1987,” said Morgan, who, thanks to his father’s involvement in the Shootout from the very beginning in 1988, was able to participate and win many of his classes several different times as well as run one of the Big Thunder raceboats in the memorable Big Thunder drag races. “I feel appreciative with the recognition. Obviously, the Lake of the Ozarks is a special place and the way the Shootout has recognized my dad is just extraordinary. This whole thing shakes me up a little since it’s been almost 10 years since we lost him.”

“Besides the first years of helping to start and promote the Shootout through Big Thunder, I haven’t done much else besides race once in a while or run the side-by-side drag race—and I haven’t done any of that over the last 10 years since dad passed away in Key West,” he added. “Because of my connection with the Lake—my family owns a home on mile marker 44—this is a special honor. Otherwise, I have not even come close to the real Hall of Famers and other folks who have donated so much time and money to the Lake Area charities.”

One such donor is local business owner and former offshore racer Randy Kent, who has been a big reason why the Shootout’s Live Auction for its charities has raised more than six figures over the past few years. Kent, who might be best known for running some respectably fast, class-winning passes in his Speed Racer MTI catamaran, donates one or two show-quality classic cars to the auction each year. And while his participation in the Shootout competition basically ended a few years back because the sales side of his business required more customer attention as the Shootout’s reach and Kent’s customer base continued to expand well beyond the Midwest, Kent has continued to support it in any way possible. 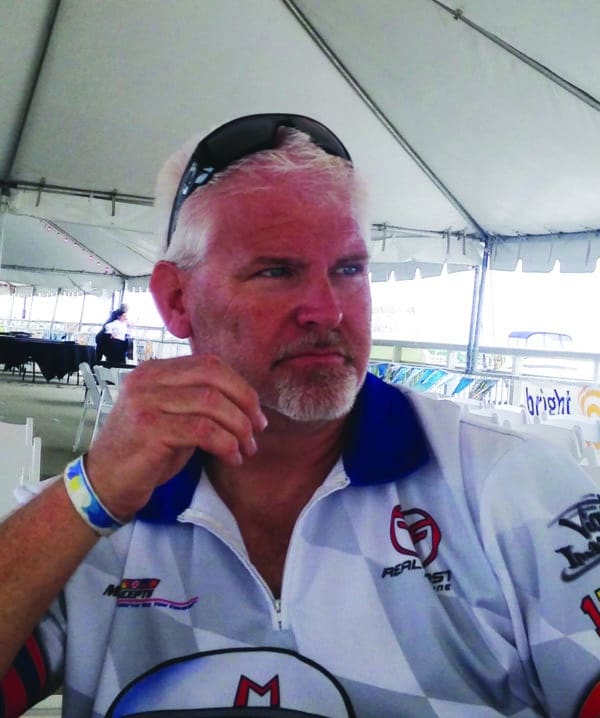 “I was born and raised at the Lake—both of my grandparents owned resorts at the Lake when I was a kid—
so this honor really means a lot to me,” said Kent, who added that he was speechless when he received the news from Captain Ron’s Bar and Grill owner Ron Duggan, the lead organizer of the event. “I remember when the Shootout started and it’s kind of crazy to look back on how far it’s come and where it’s still going. I think my first Shootout was in 1997 in my 30-foot Spectre and from there, I moved up to the Speed Racer MTI and the other Speed Racer boats.

Kent, who also owns the Kaiser-based Marine Concepts cover company and lives in a house on the former Shooters 21 property where the Shootout was held until 2007, said the live auction has become his favorite part of the event.

“My Shootout involvement transformed several years ago as I got into selling Nor-Techs and now the Renegade Powerboats line, and my focus had to change to take care of my customers,” Kent said. “Then, I think four years ago was the first year I donated a classic car for the auction. I donated a Cobra and we ended up with two bidders going back and forth, so I felt bad for the second highest bidder and told him if he matched it, he could have the second Cobra I had. And he did. Since then—because we always have to top the year before, right?—I’ve donated two cars the past two years and we’ll have two more at the auction again this year.”

Another deserving new class member, Dennis Klautzer of Viper Communications said he was dumbfounded when he got the call. 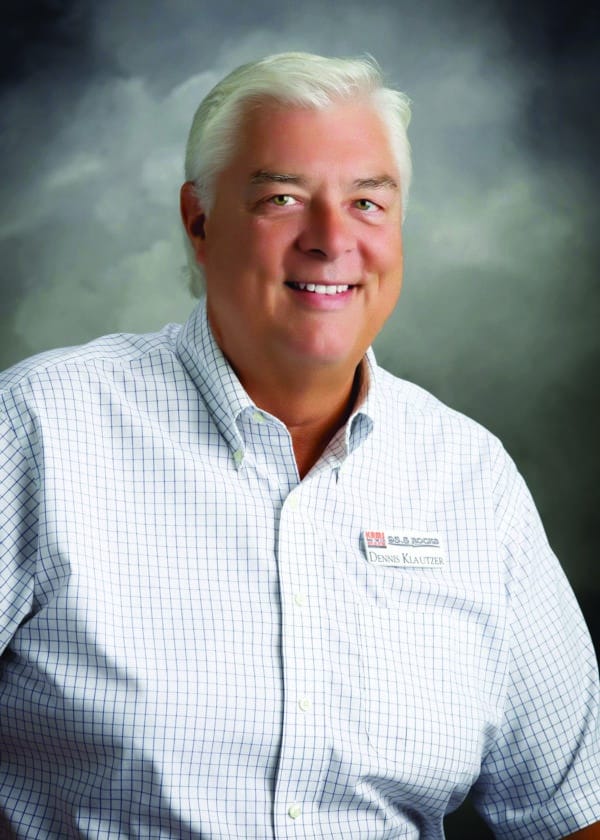 “It was quite a surprise even though I did pour everything I had into the Shootout broadcast during the years we produced it because of what it meant to this community,” said Klautzer who shared the honor by recognizing his business partner, Ken Kuenzie, and the staff of 20-plus people who helped produce the broadcast year in and year out. “We started airing the event in 1997 and, in the beginning, the coverage wasn’t great but it filled a need and we improved each and every year. The best part to me is that everyone pitched in—we never had to ask anyone twice because they all knew there was no charity event like it at the Lake. That’s what makes the Shootout my favorite event.”

Klautzer was supportive of the move to Captain Ron’s after Shooters 21 closed and the event needed a new location. Along with that transition in 2008, Klautzer and the team took their broadcast to the next level with multiple cameras on the course and roving dock reporters, if you will.

“Transitioning the broadcast to Captain’s Ron presented some new challenges, but nothing we couldn’t overcome,” Klautzer said. “I can’t tell you how many times we pulled our hair out trying to figure things out. Fortunately, my partner, Ken, and I are both engineers so solving a problem is something we live for. And, because of our solutions, we ended up pioneering some technology that no one else was doing at the time.”

One of the most dedicated racers of all time and the oldest participant in Shootout history at 77-years-old in 2020, Ivan “Buck” Stracener of Moreno Valley, Calif., started competing in the top-speed contest in 2006 in his Kachina Powerboats V-bottom. He happened to take a family vacation to the Lake in 2005 and decided he wanted to haul his boat back to the Lake the following year for the Shootout—and he did just that. The rest is history as Stracener went on to win his class several years in a row and then he bought a new boat, a 28-foot catamaran from Nordic Boats, and ended up running 148 mph in 2011 in the 28 SS powered by a single 1,350-hp GT Performance engine. 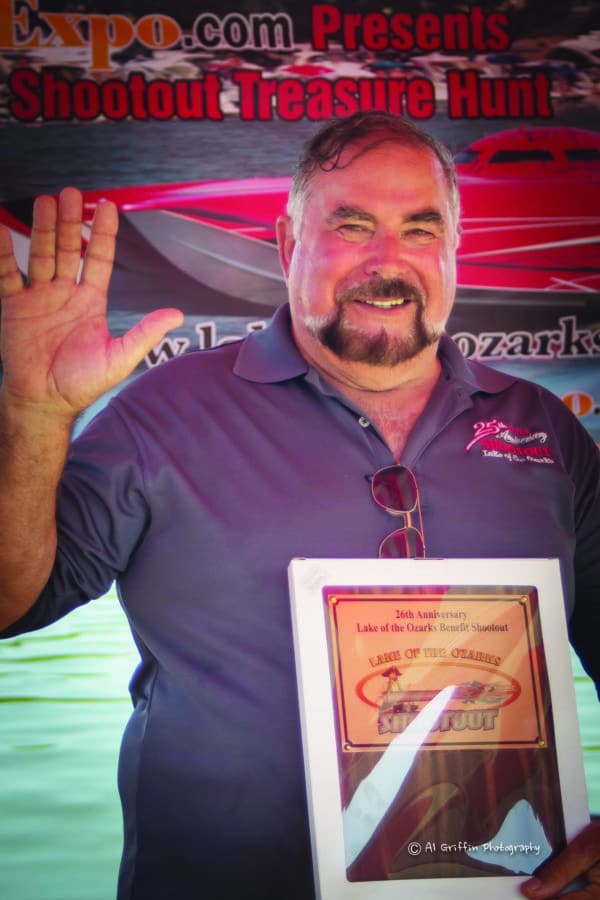 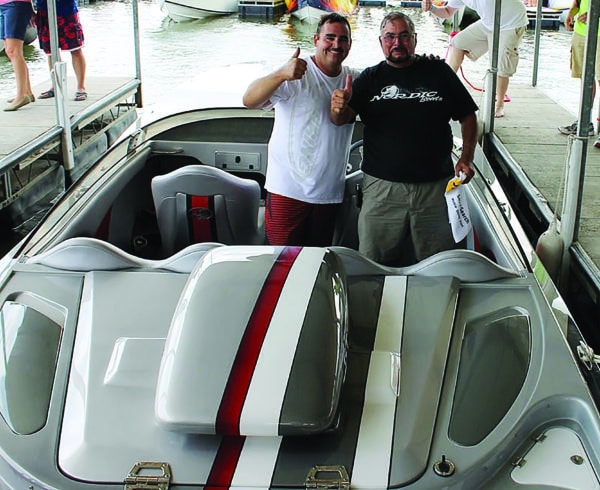 “I never expected this,” said Stracener, who sold his Nordic a few years back so he hasn’t run his own boat—instead he’s throttled for a couple of single-engine cat owners. “I love the Shootout and Lake of the Ozarks; it is a special place. I always look forward to it and I can’t wait to get back out there this year.”

Stracener is planning to run with Ty Harris again in 2021. The two reached a top speed of 137 mph two years
is a row in Harris’ 1992 24-foot Eliminator and are excited to give it a go again this year.

“What keeps me doing this is my lust for speed, I guess,” Stracener said when asked what motivates him to keep entering the Shootout. “Once I moved from my Kachina to my Nordic cat, I never lost my class. They even moved me from the amateur to the pro class, and every year my goal was to run at least one mile per hour faster.”

For Connie and Dave Weyer, the universally loved founders of Advantage Marine LOTO in Sunrise Beach, the recognition was earned for their endless amount of support over the years from a sponsorship and volunteer standpoint. 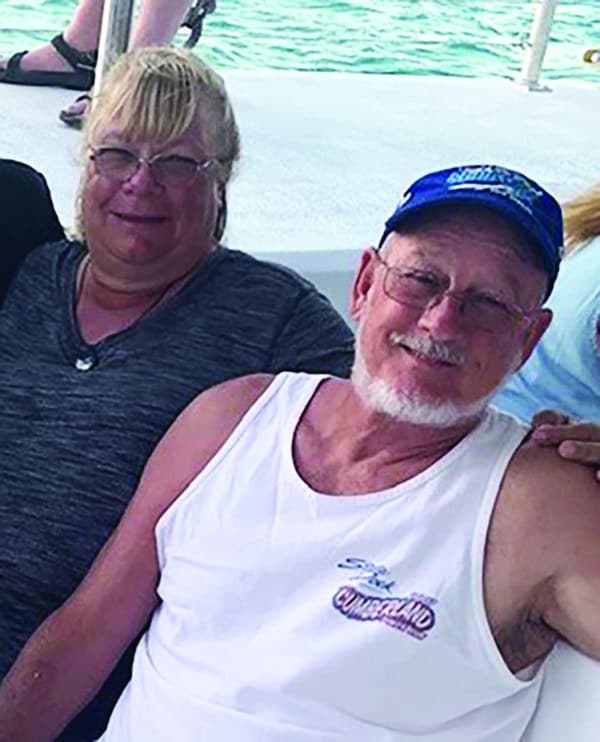 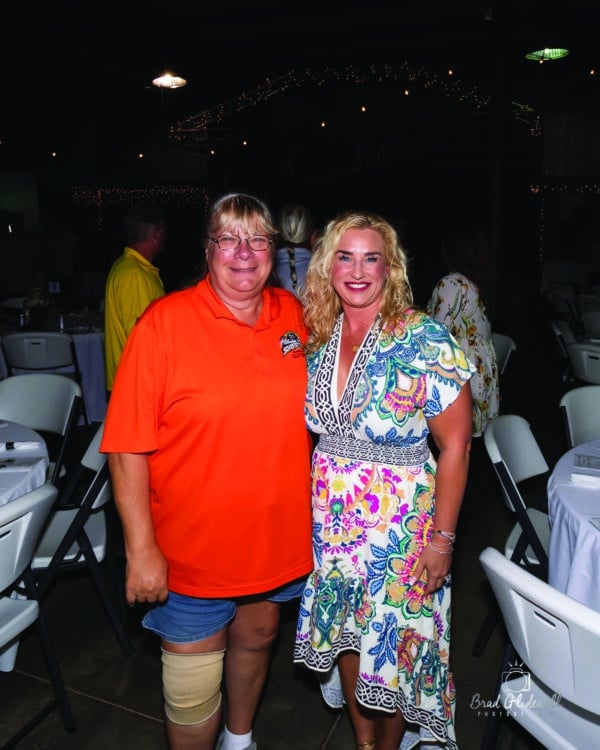 “The bottom of my jaw dropped to the floor when they told me,” said Connie Weyer, who is a member of the Shootout Board of Directors and couldn’t believe it when her fellow board members shared the news during a recent meeting while her husband, Dave, listened in via cell phone. “It’s a great surprise. I feel like there are other people who may deserve this more than we do, but we’re very honored to be recognized.”

The Weyers have been participating in the Shootout since 2004, and Connie Weyer was on the committee that helped make the decision to move the event to Captain Ron’s in Sunrise Beach.

“I help with the big poker run and then I lead the Run What Ya Brung Poker Run, which benefits my daughter and grandson’s foundation,” said Connie Weyer, whose lost her daughter and grandson in a tragic car accident in early 2018. “And I help with whatever else needs to be done. I just do what I’m told (laughs). Seriously though, we love every aspect of the Shootout. We love the racing side of it and seeing people come in from all around, but the best part is the charities. The racers and boaters have such big hearts and I just love being around that.”

Duggan, who was inducted into the Bob Morgan Memorial Shootout Hall of Fame in 2019, said he was excited about this year’s group.

“Every year we come up with another great class, and every year I wonder if we can do it again,” Duggan said with a laugh. “Somehow we continue to find quality people. And this year I think the class is a very good mix. We have racers, sponsors and volunteers; every one of them has had a big impact on the Shootout.”