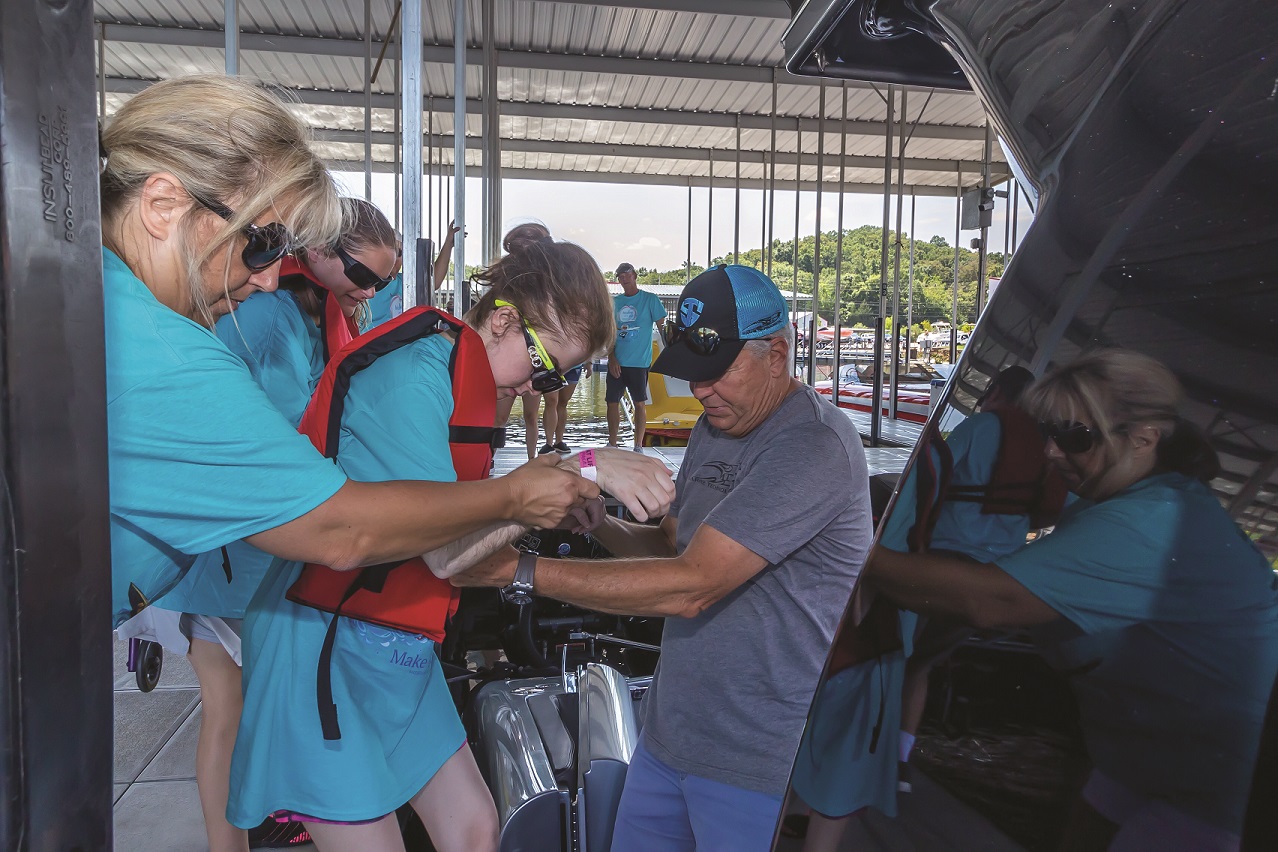 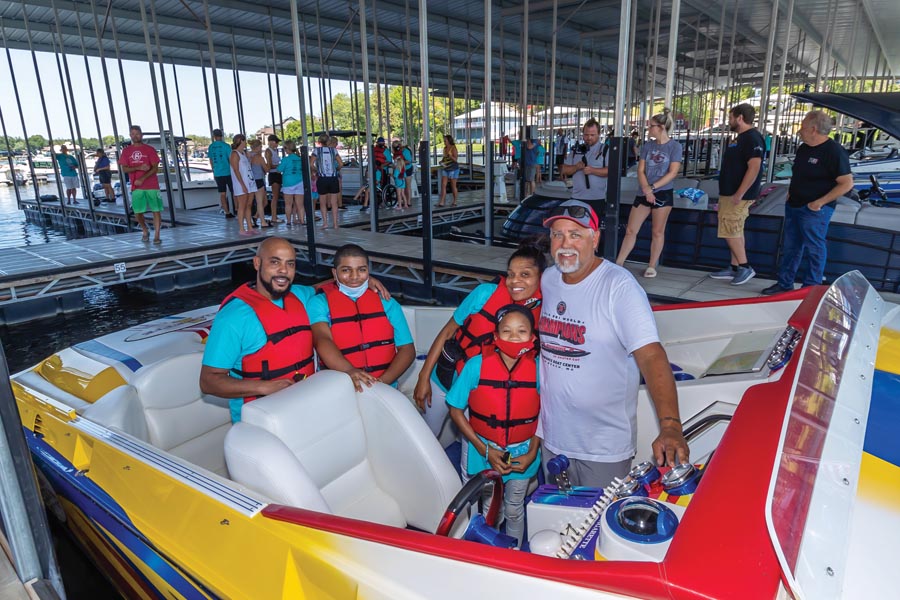 Every morning, many of us at the Lake of the Ozarks take a moment to marvel at the beauty before us. On our all-too-short weekends off, just as many of us take to our power and pleasure boats to enjoy a day out atop shimmering waves and exhilarating air. With all of this beauty at our doorstep, what better way to give back than by sharing our boundless blessings with children suffering from critical illnesses?

For some time now, members of the Shootout’s volunteer board have worked to include the Make-A-Wish foundation in the Ozarks’ annual boating extravaganza. From this love for the kids came the Wishing On A Ride program. Brave children fighting terrible illnesses, for years now, have had the opportunity to be kids and have fun while riding on some of the Lake’s most powerful performance boats. 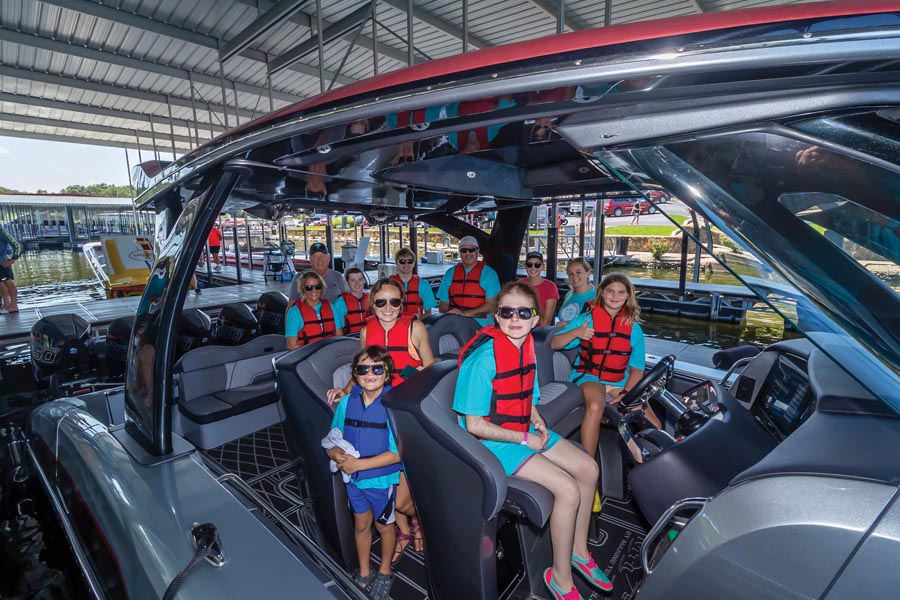 To connect families with the program, Make-A-Wish Missouri & Kansas works directly with volunteers and community leaders like Tiffany Maasen, a longtime Lake of the Ozarks resident and owner of Maasen Insurance Services in Camdenton. Maasen’s work with Wishing On A Ride does all it can to provide for Make-A-Wish families, even working with lodgers like Red Oak Resort, Margaritaville, Old Kinderhook and the Sleep Inn to provide hotel rooms for families traveling from far away to partake in the program. Meals are provided to traveling families as well to ease the strain of such a long trip, and any potential financial hardships.

Maasen had already been volunteering with the Shootout when she jumped on the opportunity to take point and established the Wishing On A Ride program, and she has overseen its progress since day one. 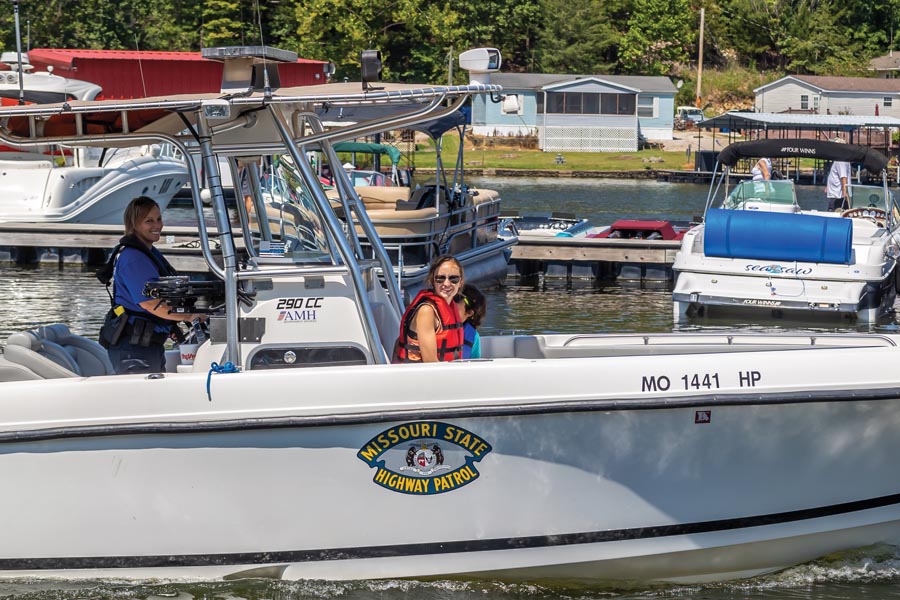 “Of course, Make-A-Wish has always been near and dear to my heart,” says Maasen. “So we work with Make-A-Wish Missouri & Kansas, and we put the word out to all the Make-A-Wish families. It’s not their Wish, but it’s just another activity they can do to take their minds off of all the stuff that they’re going through.”

As this program grew, families would come from as far as Oklahoma, Kansas, and Nebraska to take part in Wishing On A Ride. Emboldened by her experiences with helping, as well as seeing the interest and goodwill from the community towards the program, Maasen was deeply inspired to go even further.

“The Wish rides at the Shootout and the Lake of the Ozarks do not raise anything for Make-A-Wish,” says Maasen. “We had six or seven local children on the Make-A-Wish list whose wishes can cost around $10,000 each, and I thought we should help raise funds to pay for that.  I started putting an item in the Shootout Live Auction event designating funds to the Make-A-Wish Foundation.” 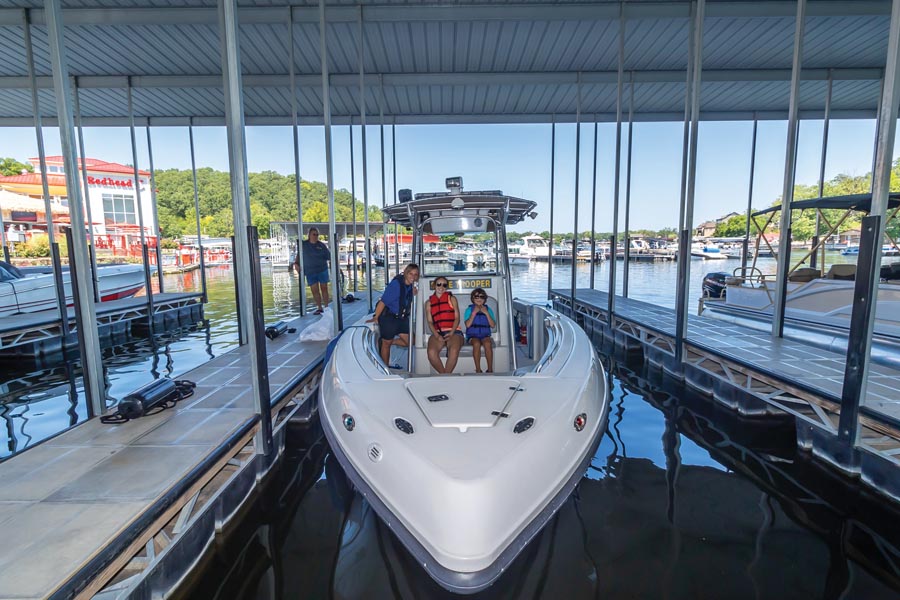 The first year she did this, Maasen acquired a baseball autographed by a pro player – and along with direct donations brought in $20,000 to donate. This success spurred even more interest, where she partnered with the organizers of the Annual Super Cat Fest, a gathering of the fastest, most exotic offshore marine hardware in the world that occurs in conjunction with the Shootout to create Super Cat 4 Kids, a live charity auction and dinner that is now an annual occurrence on the Lake.

Last year alone, Super Cat 4 Kids brought in $300,000 in donations for various Shootout charities, and $80,000 in specified donations for the Make-A-Wish Foundation.

“The reason why it has been successful is that they love it,” says Maasen. “The performance boaters support Make-A-Wish kids throughout their many boating events across the country.” 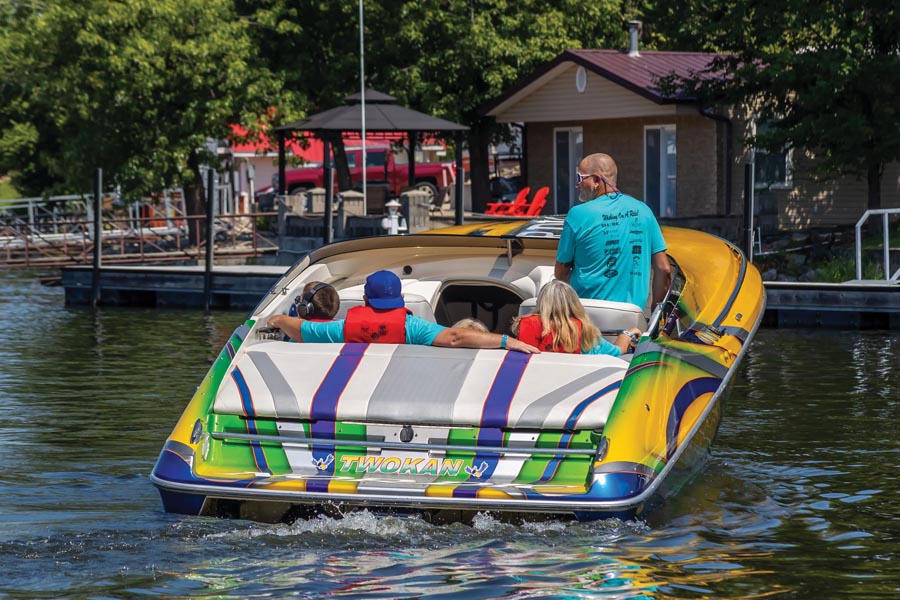 This is evident in the amount of boaters, helicopter pilots, and even exotic sports car owners that offer every year to give rides to Make-A-Wish families.“We don’t let just anyone give rides– they have to meet a lot of criteria for these brave and terrific kids,” says Maasen.

After boaters and other motor enthusiasts have qualified to participate, Maasen and her team, including Lake resident and volunteer Lisa Larsen of Showcase Publishing, work hard to ensure that the kids and their families can forget their worries and just have a fun day.

“We try to get them in early and a volunteer team member meets them and their families at the Street Party,” says Maasen, referring to the annual closing down of the Bagnell Dam Strip that kicks off the Shootout festivities. “We like to introduce them to the operators who are going to take them and their families out on the water before the big day.” 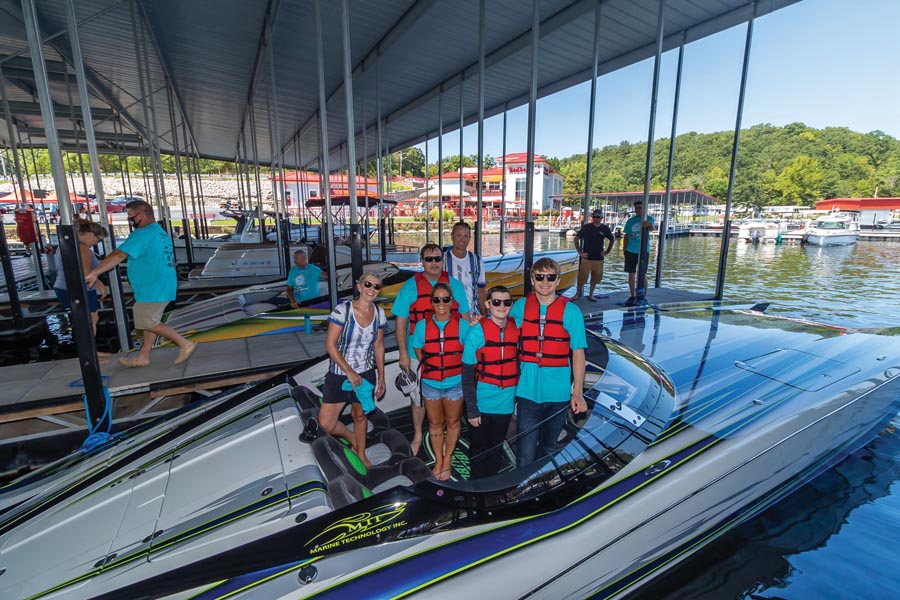 Some of these incredible volunteers are boaters like Taylor Scism of Marine Technology, Inc., who was recently named to the Young Professionals Board for Make-A-Wish Missouri-Kansas and the 2022 Honorary Chair of the Super Cat 4 Kids Auction.

“Taylor has a huge heart and she drove the kids around and was giving out autographs,” Maasen said. “She had a ton of fun visiting with the families… the young girls just idolized her as a winning race boat driver.”

On more than one occasion, Maasen reports that boaters and volunteers say they’ve been deeply moved by their experience helping these kids and working with Make-A-Wish. Maasen absolutely does this for the kids, but over time, she’s come to see the positive impact the program has had on boaters, as well. 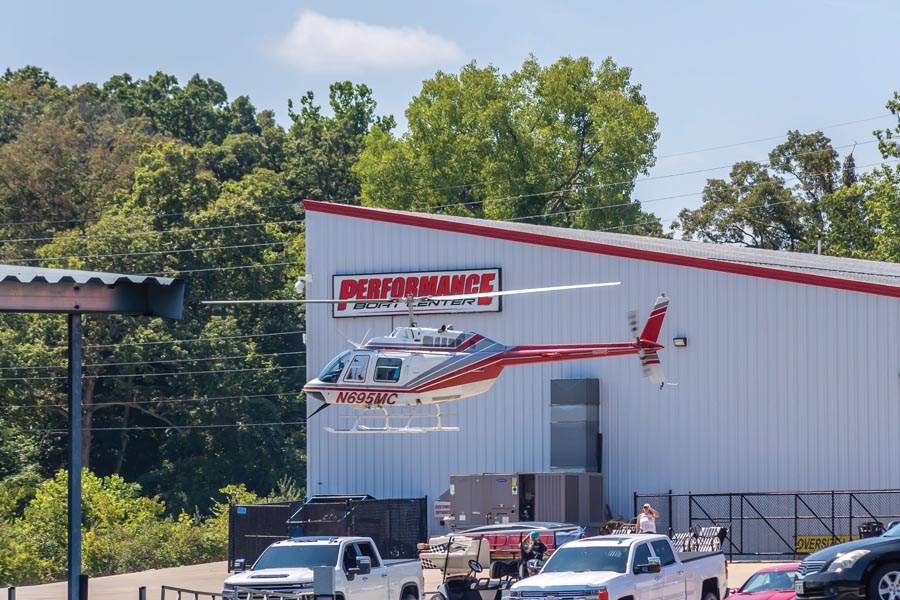 “I’m thanking them for being there, and they’re thanking me for the opportunity to give rides,” she says.

For the Super Cat 4 Kids Live Auction, Maasen works every year to provide quality items for those bidding in attendance, especially items donated and created by Make-A-Wish kids.

Maasen recalls, “During the Wish rides, there are a couple of times I have gotten things from Wish Kids to be auctioned off.”

One story she recalls in particular, involved a little girl named Macy.

“Her wish was a sewing machine,” Maasen remembered. “She got her sewing machine and while she was going to treatment, she learned from a neighbor to sew a bead bag – they get to pick a glass or wooden bead to put on a string and some put them in a bag – she sewed bags. We got all of this cool material that kids could put their ‘beads of courage’ in. It was so amazing what she was doing, I asked her if she would be interested in making blankets or something for the live auction. She ended up making 10-12 blankets and it raised over $40,000 for the Make-A-Wish Foundation.” 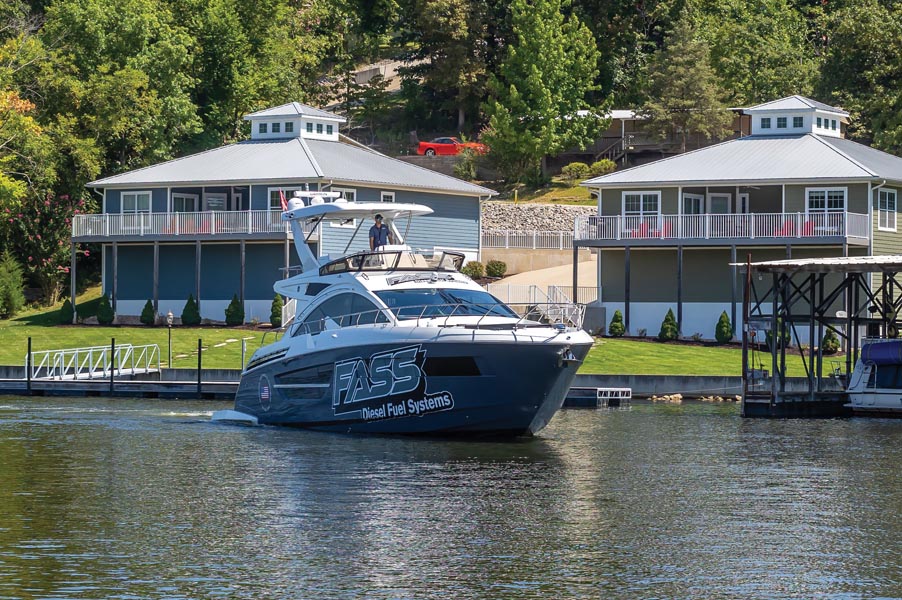 “The Wish Kids we invite are any Wish Kids,” Maasen continued, in closing. “Someone waiting for their Wish, someone that already got their Wish, or kids in remission following treatment.”

Through Maasen’s continued effort and involvement, Brett Manire, Owner of Performance Boat Center, has followed in her wake, literally.

“The Make-A-Wish Foundation is an amazing organization,” Brett explained. “I watched how much time and effort Tiff put into it and it made me want to be a part of that. The first ride I gave was a family from my hometown in Nebraska, and it hooked me right off the bat.”

So, this year, as the festivities begin and our Annual Shootout kicks off, keep your eye out for lucky volunteers and Wish kids alike to come together and provide a great experience that heals the hearts of all involved. Perhaps you even have a great new powerboat that can become part of this year’s experience! Interested parties should contact Tiffany Maasen at (573) 368-1177 or email her at mtmaasen@gmail.com to discuss qualifications. 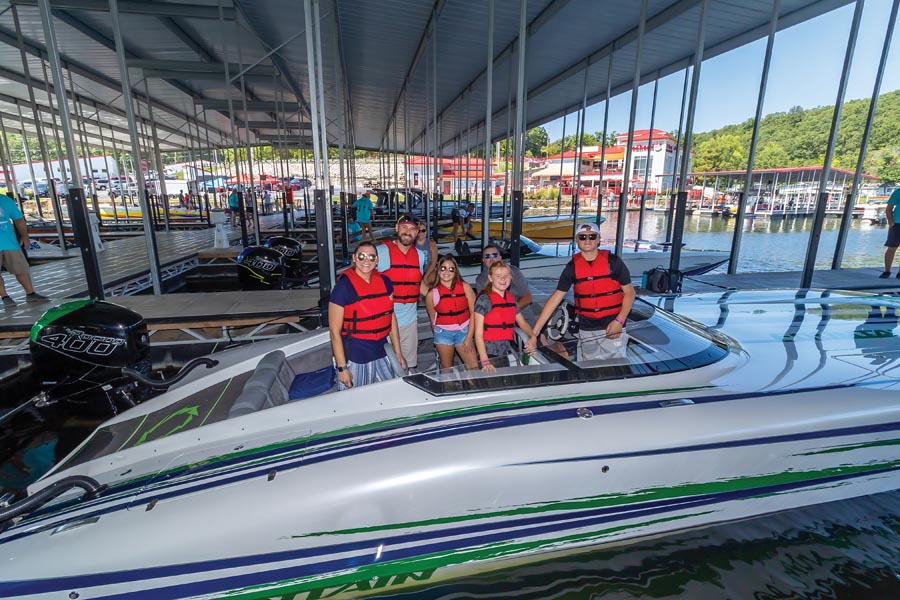 The event takes place each year at both Performance Boat Center/Red Head Lakeside Grill and Captain Ron’s. Maasen would like to extend a special thanks to Tom Cline Helicopters, Oakstar Bank, and SHORE Magazine for continuing to support the event year after year. We at the Shootout wish you both health and another wonderful season of pleasure boating here at the Lake of the Ozarks!